Why Does My Dog Eat Everything? 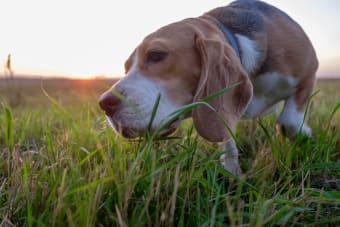 From toys and grass to feces and even roadkill, it really seems like some dogs will eat just about anything. If your dog pretty consistently eats things it shouldn't, there may be a good reason to be concerned. In today's post, our Farmington Hills vets will walk you through why your dog will eat anything on offer some tips on how to curb these behaviors.

Dogs That Eat Anything

If your pup won't stop eating anything and everything they can get their paws on, rest assured that you aren't alone. While this behavior may turn the stomachs of some pet parents, it's actually a quite natural scavenging behavior our canine companions have. In particular, puppies can be quite keen on eating things like stones, trash leaves and dead animals they come across.

What Dogs Eat & Why

In both people and animals, the term for eating things that aren't actually edible is Pica. Dogs with pica have a compulsive urge to eat indigestible items like rocks, dirt and sticks. It is generally held that animals with pica may be missing some essential minerals or other nutrients from their diet. If you think your dog's urge to eat inedible items could be a sign of pica, contact your vet.

Below are some of the most common substances that our four-legged friends love to eat:

Dogs will often nibble on grass. Some dogs, however, like eating grass far more than others. As long as your pup is healthy otherwise, eating grass is generally considered to be safe as long as it isn't coated in chemicals.

It is believed that dogs eat grass for a variety of reasons including introducing more fiber into their gastrointestinal tract, relieving boredom, and simply because they enjoy it. If your pup is eating an alarming amount of grass speak to your vet about ways to curb this canine behavior.

Eating dirt can be quite commonly seen in puppies. Why young dogs will choose to eat dirt is unknown, but it's often thought that this is partly caused by the interesting scents given off by dirt in fields, forests or even your mulch pile. It could be that eating dirt helps a puppy to better understand the world that surrounds them. If your dog has a taste for dirt every so often, there's probably nothing to worry about for you.

That said, eating large amounts of dirt can be problematic since too much could clog up your dog's digestive tract. If your pooch loves to eat dirt, speak to your vet about what might be causing the behavior and what you can do to stop it.

Many dogs love to play with and eat rocks, which can be a real health concern. Chewing rocks can lead to damage to teeth and gums, and choking is a very serious hazard. If your dog is a teething puppy, try supplying your pooch with lots of fun chew toys.

If your adult dog is obsessed with eating rocks, it may be a good idea for you to head to your vet. Eating rocks may be a symptom of boredom, anxiety or looking for attention. Your veterinarian will be able to help you to diagnose the cause of your dog's behavior as well as give you some different ways to curb your canine companion's strange taste for stones.

Pet owners will often come to us, very exasperated, because their dog constantly is eating poop. It turns out that eating feces is so common, it actually has a name of its own: coprophagia. It may be caused by a combination of psychological, genetic and behavioral factors.

Eating their own poop is generally harmless for a dog. However, eating another dog's poop or the poop of other animals should be a cause for concern. Toxins, viruses and parasites can all be transmitted to your dog through the feces of other creatures.

One theory suggests that poop eating could be part of your dog's innate scavenging tendencies, developed as a survival tool for times when food is scarce. After all, when there is no food to be found a dog just can't afford to be too picky.

Some physical reasons that dogs may eat poop include:

Other factors that can lead to poop eating in dogs:

No matter what it is that your canine companion enjoys eating, there are a few things you can do to help curb this problematic habit in your dog.

Your veterinarian can give your dog a nose-to-tail examination to check for signs of illness, discuss the causes of your dog's strange eating habits, then provide you with valuable advice on your pet's nutritional and caloric requirements based on your dog's size and breed.

Note: The advice provided in this post is intended for informational purposes and does not constitute medical advice regarding pets. For an accurate diagnosis of your pet's condition, please make an appointment with your vet.

If your dog eats anything they can find on the ground and even more, contact our veterinary team at Angel Animal Hospital today.

Looking for a veterinarian in Farmington Hills?